Integration is the New Inclusion

I’ve been thinking about this concept and others lately and they all seem to have a common theme – question the constructs within which I assume anything to be true. Question everything. 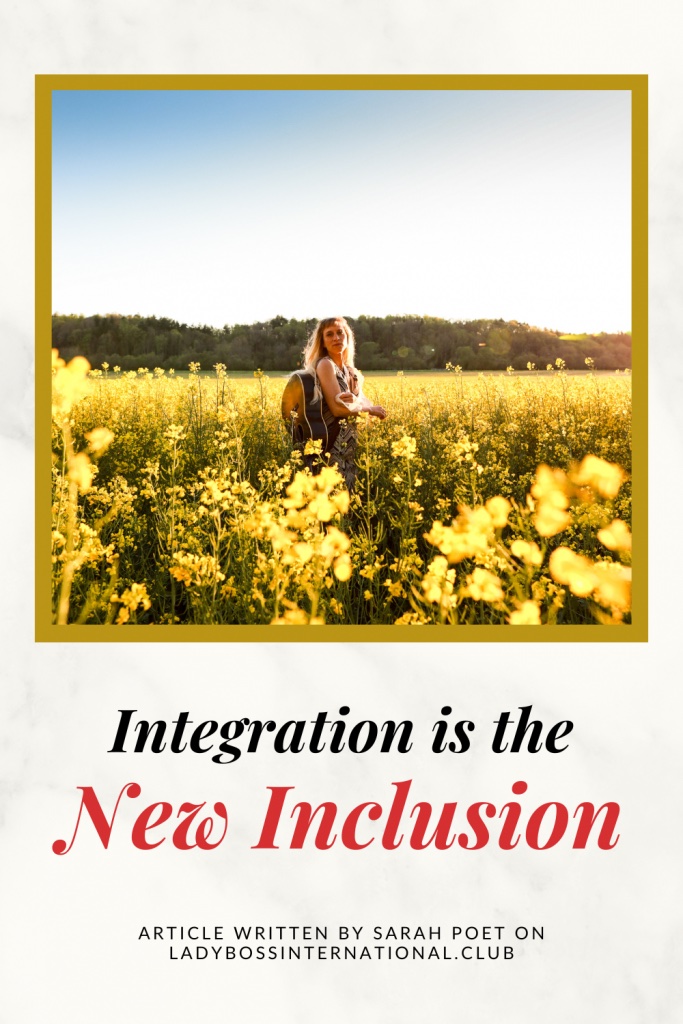 We see this thing we think is reality, but it’s not reality. It’s actually all based on our assumptions of it, the frameworks that have existed since before we arrived. For example, we have frameworks of patriarchy and colonialism still at play in our current world. Those are not my favorite frameworks, and so I don’t like to assume that they are true just because we can see evidence of them. I want to dream of new frameworks, and then create them.

As humans, we put a lot of energy into fighting the frameworks, or trying to deconstruct them. Or, some of the time, we just operate within these constructs without questioning them at all. As someone who speaks about masculine and feminine archetypes in my work, one of the most common frameworks that I want to encourage us to question is the one that said men have power. Well, why does this have to be true? Why was this true? And most importantly, how do I (or we) act or behave when we assume that it is true?

It’s just a framework for reality that we default to participating in, and then we try to rise up and fight against it, but it doesn’t even have to be true and we can choose to question it and therefore collapse what is false about it. Men are not inherently more powerful than women, and so I don’t have to react in a way where I fight for my power. I am inherently powerful – not because I’ve taken my power back or fought against a system. But just because I am.

Let us also note that this framework of “someone has power and someone doesn’t” was built within a paradigm of separation.

If things are separate and not united, then one group or gender can have power and another can’t. But what if we choose to believe in unity instead of separation? What if we stop participating in separation? Let’s look at more examples of how humans behave when we believe in the construct of separation. I’d say entire feminist movements have been built on the concept that one group has power and another doesn’t, and so feminists have been fighting for power within that framework. You might say, “Of course women have to fight for power!” And I would say, “No, we don’t.”

We simply have to be powerful. I do not define my power because I’ve had to “take it back” or fight men for my power. I spent a lot of time doing that, and it’s actually exhausting. Rather, I want to be powerful, and to be sovereign, which requires integration of my personal and inherent power, not my inclusion into an external system of differentiated power. Who I am does not require external permission, which I feel like inclusion is inherently seeking.

If I focus on the external framework accepting me, then I will have to fight for my right to be included. I don’t choose to do that. I choose to integrate all parts of Self and to show up whole. Nothing defines whether or not I can be included, except my own level of personal integration.

It’s like I said in my TEDx, if “equity” of women means that I have to participate in a rat-race built in patriarchal masculinity (different from conscious masculinity), then I don’t want it. I played that game as a woman leader, climbing ladders and putting on a false sense of being able to handle anything. I fought against misogyny and wanted to be included for a time. Until I didn’t, because who made those rules?

More and more lately we see women leaving the workforce in this thing that culture is calling the Great Resignation. I know that the pandemic has burdened women with the lion’s share of responsibilities for family and caretaking, and yet I believe that women are also leaving because they are questioning the framework of the systems that haven’t been working for us for years. Because they are inherently patriarchal, inherently separationist, and women have had to fight within those systems for something we should have never had to fight for.

I would call that thing we should never have had to fight for “integration.” Let’s look at integration in a personal sense. As a child, I experienced deep trauma and I didn’t realize what had truly happened to me until I was an adult with the dis-integrated symptoms of trauma, which led me to go to trauma-based therapies. In those therapies, such as Hakomi and Internal Family Systems, we work to integrate the “parts” of the self. If the child-self has experienced a traumatic event, there will be a separation in the psyche.

That “part” may not feel safe anymore, or it may feel outcast, and it may stay that way well into adulthood. In the therapies, we don’t really ask the core Self if these parts can be included – if they can pull up a chair and join the other parts of Self and be accepted. To be explicitly clear, we don’t just want to include the parts, we want to integrate them. And the assumption is that they can all be integrated, we just have to look at the health of the system and restructure the psyche to integrate all the parts. We work to integrate the separated or isolated part. And we do this because wholeness is the entire purpose.

An integrated human, just like an integrated system, will operate much more functionally in wholeness. To me, inclusion depends on a part (or group of people) having been separated out, and then included back in. But integration speaks of wholeness and to me has a deeper intent.

I used to be a Special Education teacher. As many people likely know, each student who qualifies for special education has an individual legal document called an Individualized Education Plan (IEP in most states). The IEP will say how much time a student is able to sit in the regular classroom and access the curriculum from there versus how much time they need to be in the smaller special education classroom, to get all their needs – academic and social – met.

First I want to say, I think schools are doing the best they know to do, but I do question this model. When a student can go back into the “regular” classroom for their education, we call this “inclusion.” But the reason I question whether this is the correct way to do it or not is because, to my original point, the entire basis for this way of “including” is based in a model of first separating the children out. Why are the children separated? Why are schools set up this way? And what would an integrated model of education look like?

Well, I consult with a few such schools, and what we’re noticing is that student empathy and community actually increase when there is a model of integration. No one is the core group, and no one needs to be included back in, because the wholeness and coherence of the group were always the priority.

If we never separate out, then we don’t need to “include” back in.

And you may say, “Yes, but this idea is null and void because we do have exclusionary systems and women were and are treated as less than and people of color were and are discriminated against, therefore having less access to full equality.” And I would say: I know, I know, and all of that is still predicated on ideas of separation, which I’m just not interested in perpetuating. If I condone it, then I am constantly living my life within that framework, fighting against walls and barriers that will feel very hard to knock down. I want to question the walls we fight against. I find that in my own life, as I question the structures, they simply begin to fall down, because I’m not believing that I am within them anymore.

I don’t want “inclusion for all” – because inclusion is inherently based in separation. You have to first be separate in order to be included again. What I am advocating for is the integration of all into a paradigm of Unity.

It’s a mindset shift of epic proportions. And it’s possible.

So what does this look like when we’re talking about groups of people, or organizational health, or the fact that black and brown people are still treated differently?

It means that we begin to design systems of integration rather than systems of inclusion. It means that we question the existing structure within which we are trying to “include” everyone. If inclusion feels difficult, or if it isn’t working, maybe let’s question and realize that these structures were not meant to support all people and parts. These systemic structures were built within a paradigm of separation. Therefore, they may not be the best thing to fit into. Do you want to be included into a system that was not healthy to begin with? Or do you want to make sure that an integrated system exists, and that everyone can operate with equity within it?

Again, I want the latter.

I want us to question everything, to question the walls that we stand within. I want us to have open dialogue about what our needs are, what kinds of collectives and communities we want to create, and I want to do this together. No one person (or group of people) can design systems that are inherently integrated. We need integrated groups of people to design and develop new integrated systems. I believe that this is possible for our workplaces and communities. All members of the organization or the community would need to be considered and consulted in order to design an integrated, new, system that is capable of far more than the systems of the past. It requires us to redefine leadership, to move from old models of patriarchal masculine where there was a hierarchy or one leader, and to take team restructuring and shared leadership (or at the very least, stakeholder feedback) very seriously.

I am here for the work of it, and willing to facilitate new ventures such as this. I’m here to do the worthy work of analyzing organizational systems, asking what is dis-integrated and separate, and to work to integrate those parts – be it people, ideas, resources, emotions, races, genders – into new systems where separation is no longer the assumed framework.

Let’s build integrated systems within the framework of unity. Let’s do it together. Sarah Poet is a truth seeker, a soul traveler, a former school creator turned feminine/masculine integration expert, and, as it turns out, a medicine woman for modern times.

It is Sarah’s mission to serve the true evolution of human consciousness, to integrate feminine & masculine on all levels, and to bridge us collectively from separation to connection, and to live a life of integrity and heart.

You can watch her TEDx and book a consultation at www.sarahpoet.com.

Inclusivity in Coaching Through Exclusion Belonging and Inclusivity: Our Founders Origin Story

Positively Influence Your Business By Being Your True-Self

Mommy Bossing – How To Juggle Momming With Bossing